NASA satellites have captured striking images of vast palls of smoke billowing from wildfires on the Indonesian island of Sumatra. The smoke has been moving east and has descended on Malaysia and Singapore, pushing air pollution to record levels. 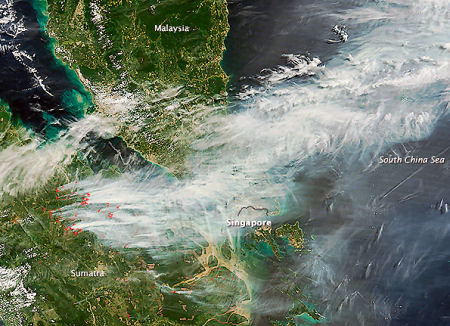 Singapore's yardstick of pollution, the Pollutant Standards Index (similar to the U.S. Air Quality Index) peaked at 401 on June 21, the highest level ever recorded. Health authorities consider any level above 300 to be "hazardous" to human health. Levels above 200 are considered "very unhealthy." 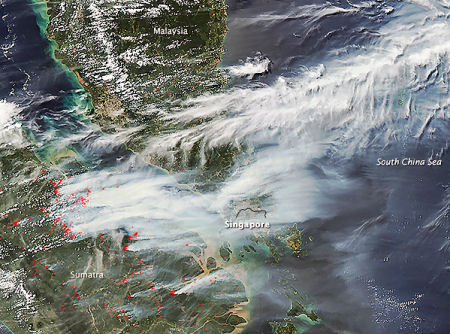 Meanwhile, in Malaysia, a state of emergency in two southern districts has been declared after the smog reached hazardous levels. The towns of Muar and Ledang are in shutdown and residents have been told to stay indoors.

Many are blaming the land-clearing fires on Sumatran palm-oil plantations. Palm-oil firms - some of which are based in Malaysia and Singapore - have been accused of using illegal slash-and-burn techniques to clear space for their plantations.

Singapore's Prime Minister Lee Hsien Loong warned that the haze could "easily last for several weeks and quite possibly longer until the dry season ends in Sumatra." Singapore's foreign minister said he had asked the attorney-general to consider possible legal options. However, he said it was mainly up to Indonesia to take action against the companies.