You are here: Home › Animal Kingdom › News › Stunning new species of palm-pitviper discovered
By Will Parker on May 15, 2013 in Animal Kingdom, News 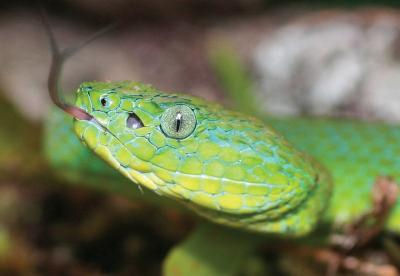 Because of similarities in color pattern and scalation, the new species was previously confused with other Honduran palm pitvipers. However, genetic analysis revealed that the closest relatives of the new species are actually found over 600 km to the south, in the mountains of Costa Rica. The new discovery has been detailed in the journal Zookeys.

The beautiful and very venomous snake is found in the diverse highland forests of the Texiguat Wildlife Refuge. The region is also home to the elusive jaguar and Central America tapir, as well as howler and white-faced monkeys, sloths, and a variety of amphibians, reptiles, and plants. 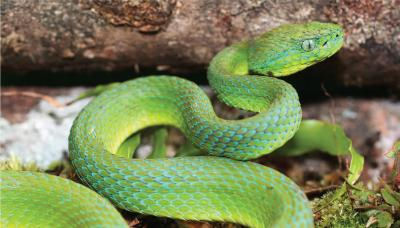 To draw attention to the dedication and sacrifice of many grassroots conservationists in Honduras and Central America, the new species was named in honor of Mario Guifarro. Guifarro was a former hunter and gold miner who became an outspoken conservationist when he saw the vast rainforests of eastern Honduras being destroyed and converted to cattle ranches. After years of threats and multiple attempts on his life, Guifarro was ambushed and murdered on 15 September 2007 while on a mission to work on a biosphere reserve for the indigenous Tawahka people.

The lead author of the study that describes the new species, Dr Josiah Townsend, from Indiana University, said B. guifarroi should be immediately classified as Critically Endangered due to its limited known area of occurrence and the potential for anthropogenic damage to its habitat. “We also consider that this species warrants immediate consideration for protection under CITES, given its striking appearance and high potential for exploitation in the pet trade,” he concluded.

Related:
Discuss this article in our forum
Bolivian park may be most biodiverse area on planet
Gecko’s tail has a mind of its own
Tiny new reptile species discovered