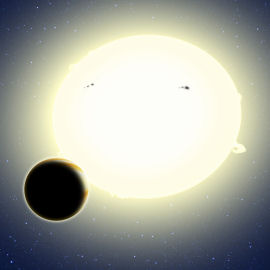 For the first time, astrophysicists from Tel Aviv University and the Harvard-Smithsonian Center for Astrophysics have discovered an exoplanet using a new technique that relies on Einstein's special theory of relativity.

Previously, the two most successful techniques for finding exoplanets were radial velocity (looking for wobbling stars - caused by an orbiting planet pulling on the star) and transits (looking for dimming stars - caused by a planet moving in front of the star). Most of these exoplanet discoveries have been made using data from the Kepler spacecraft.

The new technique, which also used observations from Kepler, looks for three small effects that occur simultaneously as a planet orbits the star. Einstein's "beaming" effect causes the star to brighten as it moves toward us, tugged by the planet, and dim as it moves away. The brightening results from photons "piling up" in energy, as well as light getting focused in the direction of the star's motion due to relativistic effects.

The astrophysicists also looked for signs that the star was stretched into a football shape by gravitational tides from the orbiting planet. The star would appear brighter when we observe the "football" from the side, due to more visible surface area, and fainter when viewed end-on. The third small effect was due to starlight reflected by the planet itself.

Once the new planet was identified, it was confirmed using radial velocity observations gathered by the Whipple Observatory in Arizona. A closer look at the Kepler data also showed that the planet transits its star, providing additional confirmation.

The planet, known as Kepler-76b, is a "hot Jupiter" that orbits its star every 1.5 days, say the team. Its diameter is about 25 percent larger than Jupiter and it weighs twice as much. It orbits a type F star located about 2,000 light-years from Earth in the constellation Cygnus.

Although the new technique can't find Earth-sized worlds using current technology, it offers astronomers a unique discovery opportunity. Unlike radial velocity searches, it doesn't require high-precision spectra. Unlike transits, it doesn't require a precise alignment of planet and star as seen from Earth.

"Each planet-hunting technique has its strengths and weaknesses. And each novel technique we add to the arsenal allows us to probe planets in new regimes," said Harvard's Avi Loeb, who first proposed the new method.