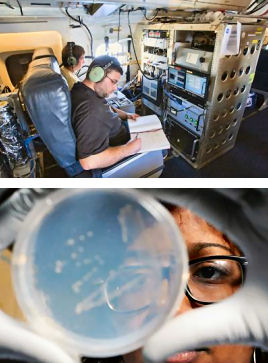 The microorganisms were documented in air samples taken as part of NASA's Genesis and Rapid Intensification Processes program to study low- and high-altitude air masses associated with tropical storms. The sampling was done over both land and ocean, including the Caribbean Sea and portions of the Atlantic Ocean.

The researchers used genomic techniques, including polymerase chain reactions and gene sequencing, to detect the microorganisms and estimate their numbers. The results showed that viable bacterial cells represented, on average, around 20 percent of the total particles detected in the size range of 0.25 to 1 microns in diameter. By at least one order of magnitude, bacteria outnumbered fungi in the samples, and the researchers detected 17 different bacteria taxa - including some that are capable of metabolizing the carbon compounds that are ubiquitous in the atmosphere - such as oxalic acid.

"We did not expect to find so many microorganisms in the troposphere, which is considered a difficult environment for life," said Kostas Konstantinidis, from the Georgia Institute of Technology. "There seems to be quite a diversity of species."

The researchers speculate that the microorganisms could have a previously-unidentified impact on cloud formation by supplementing (or replacing) the abiotic particles that normally serve as nuclei for forming ice crystals. "In the absence of dust or other materials that could provide a good nucleus for ice formation, just having a small number of these microorganisms around could facilitate the formation of ice at these altitudes and attract surrounding moisture," said co-researcher Athanasios Nenes, also from Georgia Tech. "If they are the right size for forming ice, they could affect the clouds around them."

Whether the microorganisms routinely inhabit this portion of the atmosphere - perhaps living on carbon compounds also found there - or whether they were simply lofted there from the Earth's surface isn't yet known. The researchers now plan to find out if the microorganisms are carrying on metabolic functions in the troposphere. "For these organisms, perhaps, the conditions may not be that harsh," said Konstantinidis. "I wouldn't be surprised if there is active life and growth in clouds, but this is something we cannot say for sure now."