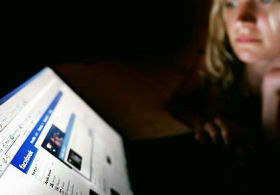 The researchers, from the University of Bonn, first carried out an analysis of the Internet-related behaviors and habits of a group of nearly 1,000 men and women. Specifically, they looked at how the subjects' thoughts revolved around the Internet during the day, and their wellbeing without access to the Internet.

Then, the researchers compared the genetic makeup of the proČblematic Internet users with that of "normal" individuals. The genetic analysis showed that those subjects exhibiting problematic behaviors around the Internet are more often carriers of a genetic variation that also plays a major role in nicotine addiction.

"What we already know about the nicotinic acetylcholine receptor in the brain is that a mutation on the related gene promotes addictive behavior," explained study leader Christian Montag. "Nicotine from tobacco fits like a key into this receptor. These neurotransmitters play a significant role in activating the brain's reward system. It seems that this connection is not only essential for nicotine addiction, but also for Internet addiction."

The study, in the Journal of Addiction Medicine, notes that the mutation is on the CHRNA4 gene. This, say the researchers, changes the genetic make-up for the Alpha 4 subunit on the nicotinic acetylcholine receptor. "Within the group of subjects exhibiting problematic Internet behavior this variant occurs more frequently in women," said Montag.

This gender aspect contradicts earlier pieces of research that found men to be more prone to Internet addiction than women. Montag thinks this may reflect specific subsets of Internet use. "The sex-specific genetic finding may result from a subgroup of Internet dependency, such as the use of social networks," he suggested.

While Montag believes that further research is needed to clarify the receptor's role, he contends that the current data shows there are genetic causes for Internet addiction. The mutation, he adds, provides a biological marker that allows researchers to characterize online addiction from a neuro-scientific angle. "If such connections are better understood, this will also result in important indications for better therapies," he concluded.