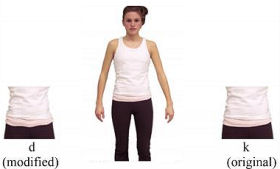 A new series of experiments have shown that when presented with images of men, both male and female subjects perceive the person as a whole, whereas images of women are perceived as an assemblage of various body parts. The research, published in the European Journal of Social Psychology, suggests that two distinct cognitive processes are in play when we look at men and women, and also hints at ways that the cognitive bias toward female objectification can be overcome.

In the study, participants were randomly presented with dozens of images of fully clothed, average-looking men and women. Each person was shown from head to knee, standing, with eyes focused on the camera. After a brief pause, the participants then saw two new images on their screen: one was unmodified and contained the original image, while the other was a slightly modified version of the original image that comprised a sexual body part. Participants then quickly indicated which of the two images they had previously seen.

Gervais argues that when presented with images of men, perceivers tended to rely more on "global" cognitive processing, the mental method in which a person is perceived as a whole. Meanwhile, images of women were more often the subject of "local" cognitive processing, or the objectifying perception of something as an assemblage of its various parts.

"Local processing underlies the way we think about objects: houses, cars and so on. But global processing should prevent us from that when it comes to people," Gervais explained. "We don't break people down to their parts - except when it comes to women, which is really striking. Women were perceived in the same ways that objects are viewed."

Perhaps the most striking finding from the study is that the gender of the observers had no effect on the outcome. The participant pool was evenly divided between men and women, who processed each gender's bodies similarly: Regardless of their gender, perceivers saw men more "globally" and women more "locally."

"We can't just pin this on the men. Women are perceiving women this way, too," Gervais said. "It could be related to different motives. Men might be doing it because they're interested in potential mates, while women may do it as more of a comparison with themselves. But what we do know is that they're both doing it."

Gervais underscored the fact that the subjects in the study's images were everyday, ordinary men and women. "The fact that people are looking at ordinary men and women and remembering women's body parts better than their entire bodies was very interesting. We always hear that women are reduced to their sexual body parts; you hear about examples in the media all the time. This research takes it a step further and finds that this perception spills over to everyday women, too," she added.

Intriguingly, Gervais suggested there may be an antidote to such cognitive bias. When the experiment was adjusted to create a condition where it was easier for participants to employ "global" processing, the sexual body part recognition bias appeared to be alleviated. Women were more easily recognizable in the context of their whole bodies instead of their various sexual body parts. "Our findings suggest people fundamentally process women and men differently, but we are also showing that a very simple manipulation counteracts this effect, and perceivers can be prompted to see women globally, just as they do men," Gervais said.