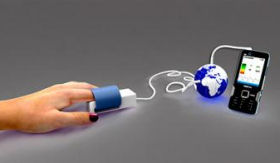 Designed for use in the developing world, a low-cost screening device connected to a cell phone could prevent the anemia-related deaths of 600,000 newborns and 100,000 mothers every year. Designed by Johns Hopkins biomedical engineering undergraduates, the HemoGlobe is designed to convert the existing cell phones of health workers into a "prick-free" system for detecting and reporting anemia at the community level.

The device's sensor, placed on a patient's fingertip, shines different wavelengths of light through the skin to measure the hemoglobin level in the blood. On the phone's screen, a community health worker quickly sees a color-coded test result, indicating cases of anemia, from mild to moderate and severe.

Anemia is often due to a lack of hemoglobin, the iron-based protein that helps red blood cells store and release oxygen. Anemic mothers face many complications before and during birth, including death from blood loss associated with the delivery. In addition, a baby that survives a birth from an anemic mother may face serious health problems. Health officials in developing countries have tried to respond by making iron supplements widely available, but in regions where medical help is not always nearby, the condition may go undetected.

When anemia is detected with the new device, a patient would be encouraged to follow a course of treatment, ranging from taking iron supplements to visiting a clinic or hospital for potentially lifesaving measures. After each test, the phone would send an automated text message with a summary of the results to a central server, which would produce a real-time map showing where anemia is prevalent. This information could facilitate follow-up care and help health officials to allocate resources where the need is most urgent.

At the recent "Saving Lives at Birth: A Grand Challenge for Development" competition, the potential public health benefits of the device won over the judges, who awarded a $250,000 seed grant to the project. The event was sponsored by prominent global health organizations, including the U.S. Agency for International Development and the Bill & Melinda Gates Foundation.

The HemoGlobe developers have estimated their cell phone-based system could be mass produced for $10 - $20 per unit. "This device has the potential to be a game-changer," said co-developer Soumyadipta Acharya. "It will equip millions of health care workers across the globe to quickly and safely detect and report this debilitating condition in pregnant women and newborns."