You are here: Home › News › Worry Fuel › Diesel fumes causing waistlines to bulge?
By Will Parker on July 20, 2012 in News, Worry Fuel 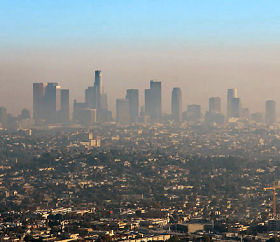 Pregnant mice exposed to diesel exhaust pollution gave birth to offspring with a significantly higher rate of obesity and insulin resistance in adulthood. The effect, say the researchers, was especially prevalent in male mice, which were heavier regardless of diet. The findings were published in the Federation of American Societies for Experimental Biology’sFASEB Journal. The new study builds on decade-old work that showed a strong correlation between air pollution and diabetes prevalence.

To make the new discovery, Duke University’s Jessica L. Bolton used two groups of pregnant female mice, one of which was exposed to diesel exhaust during the latter half of pregnancy. The second group was exposed to filtered air for the same time period. The mice lived in specialized chambers for four hours each day breathing polluted air and then were returned to normal housing after these exposures.

“It is becoming clearer that our environment profoundly affects our health in ways that are little understood,” said Bolton. “We believe these data have important implications for health disparities as a consequence of socioeconomic conditions, in which low income neighborhoods tend to be disproportionately exposed to high levels of pollution, which we hope will inform policy and regulation decisions.”