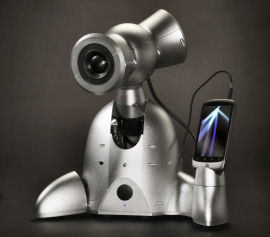 The annoying guy at parties who keeps changing the music may be facing redundancy, thanks to a new robot DJ docking station that chooses music, reacts to crowd feedback and dances appallingly. Developed by Georgia Tech's Center for Music Technology, Shimi the robot is being demonstrated today at Google's I/O conference in San Francisco and the developers say Shimi should be available to buy next year.

Professor Gil Weinberg, the robot's creator, explained that Shimi is essentially a docking station with a "brain" powered by an Android phone. Once docked, the robot uses the sensing and musical generation capabilities of the user's mobile device.

By using the phone's camera and face-detecting software, Shimi can follow listeners around the room and position its "ears," or speakers, for optimal sound. Another recognition feature, Weinberg added, is based on rhythm and tempo. "If the user taps or claps a beat, Shimi analyzes it, scans the phone's musical library and immediately plays the song that best matches the suggestion. Once the music starts, Shimi dances to the rhythm."

Weinberg says that the open development environment of Android will allow programmers to utilize all the smartphone's sensors to create a multitude of interactive applications. "Future apps in the works will allow the user to shake their head in disagreement or wave a hand in the air to alert Shimi to skip to the next song or increase/decrease the volume," he explained. "The robot will also have the capability to recommend new music based on the user's song choices and provide feedback on the music play list."

"If robots are going to arrive in homes, we think that they will be these kind of machines - small, entertaining and fun," Weinberg said. "They will enhance your life and pave the way for more sophisticated service robots in our lives."