You are here: Home › Climate Change › News › Carbon emission levels from deforestation challenged
By Will Parker on May 14, 2012 in Climate Change, News 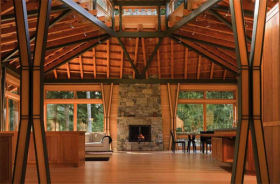 When trees are felled to create solid wood products – such as lumber for housing – the wood retains most of its locked-up carbon, say scientists who suggest that previous climate models for carbon emissions from deforestation need revision. The new study, from the University of California, Davis, provides a deeper understanding of the complex global impacts of deforestation on greenhouse gas emissions.

Published in the journal Nature Climate Change, the research found that the volume of greenhouse gas released when a forest is cleared depends on how the trees will be used and in which part of the world the trees are grown. “We found that 30 years after a forest clearing, between 0 percent and 62 percent of carbon from that forest might remain in storage,” said the study’s lead author J. Mason Earles. “Previous models generally assumed that it was all released immediately.”

When wood is used for bioenergy or turned into pulp for paper, Earles explained, nearly all of its carbon is immediately released into the atmosphere. “Carbon stored in forests outside Europe, the USA and Canada, for example, in tropical climates such as Brazil and Indonesia, will be almost entirely lost shortly after clearance.”

Earles said the study provides new information that could help inform climate models of the Intergovernmental Panel on Climate Change. “This is just one of the pieces that fit into this land-use issue,” said Earles. Land use is a driving factor of climate change. “We hope it will give climate models some concrete data on emissions factors they can use.”