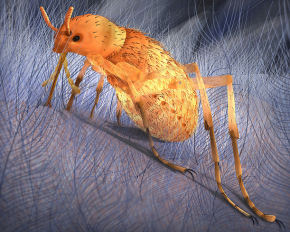 "These were insects much larger than modern fleas and from the size of their proboscis we can tell they would have been mean," said George Poinar, professor emeritus of zoology at Oregon State University, who wrote a commentary on the find in the same journal. "These are really well-preserved fossils that give us another glimpse of life into the really distant past, the Cretaceous and Jurassic."

Poinar said it's possible that the fossilized soft-bodied, flea-like insects found in Inner Mongolia (artist's impression above) are the evolutionary ancestors of modern fleas, but most likely they belong to a separate and now extinct lineage.

Scientists think that the giant flea may have snuck up on dinosaurs while they slept, crawling onto their soft underbellies and then giving them a bite that would have felt like a needle going in. "You wouldn't talk much about the good old days if you got bit by this insect," Poinar said. "It would have felt about like a hypodermic needle going in - a flea shot, if not a flu shot."