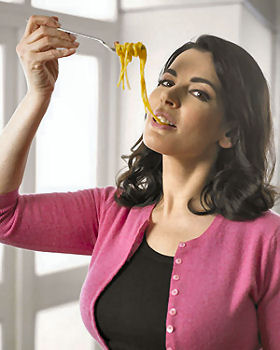 In an intriguing new study published in the Journal of Biological Chemistry, scientists investigating cholesterol's binding properties within cells say that cholesterol appears to inhibit or stop cancer growth. The new findings are supported by previous unrelated research that showed how natural compounds that are chemically similar to cholesterol can kill a broad spectrum of different cancer cells.

The scientists arrived at their hypothesis while trying to understand how cholesterol moves around inside cells in the fat's journey to cell surfaces where it reinforces their outer membrane. Specifically, the researchers were looking at the action of oxysterol-binding protein-related proteins (ORPs).

"The assumption was that ORPs bind and transport cholesterol inside cells in a similar fashion to how lipoproteins bind and move around the fat outside cells through the blood stream," explained study co-author Chris Beh, from Simon Fraser University.

The researchers found that genetic changes engineered by them block the ability of ORPs to bind cholesterol, but don't stop ORPs from functioning. In fact, says Beh, these altered ORPs "work better and activate other regulator proteins, which in turn trigger a variety of cellular processes that stimulate cell growth."

The scientists believe this happened because cholesterol-binding normally interferes with ORPs' ability to bind to another lipid or fat called PI4P, which is important for cell growth.

"That told us that ORPs probably have nothing to do with moving around cholesterol within cells," says Beh. "Rather cholesterol-binding puts the brakes on ORP's ability to bind to PI4P which, if left unchecked, could accelerate cell growth like crazy. Given that uncontrolled cell growth is a key feature of cancer, this means gaining a better understanding of the true purpose of cholesterol-binding within cells could be important in cancer treatment."

Beh says he and his fellow researchers will now try and find out exactly which proteins respond to ORP activation and under what circumstances does cholesterol turn off ORP's activation of them.

Related:
Discuss this article in our forum
"Bad" cholesterol not so evil
Researchers Give Cholesterol Critics The Finger
More evidence for opiates role in cancer growth
Are cancers newly evolved species?