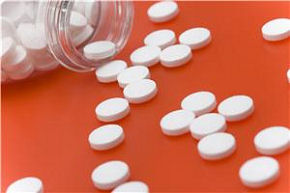 Two new studies in the journal Anesthesiology have found that the opiate drugs used to relieve pain in cancer patients appear to stimulate the growth and spread of tumors. "These studies have caused anesthesiologists to re-evaluate how best to do anesthesia and pain control for cancer patients," said University of Chicago's Jonathan Moss, who co-wrote a commentary on the findings in the same journal.

One study presented in the journal - from the University of Chicago - shows how opioids already present in the body can enhance the malignant tendencies of human lung cancer cells transplanted into mice, even without the addition of morphine.

Researcher Patrick Singleton said that cells from various types of human lung cancers have 5-10 times as many opioid receptors as non-cancerous lung cells. He also found that these receptors can increase proliferation, migration and invasion of tumor cells. Specifically, they were 20 times more likely to spread to distant sites. Medications that block the opioid receptors, such as naloxone or methylnaltrexone, reduced tumor growth and spread. "Our findings," Singleton concluded, "suggest the mu opioid receptor may be a therapeutic target."

The other paper in the journal, a retrospective study by Andrey Bortsov, from the University of North Carolina, used human data to bolster the opioid-cancer link.

Bortsov's team looked at survival rates from an earlier study of more than 2,000 breast cancer patients. Women being treated for invasive breast cancer who had a tiny genetic mutation that made them less sensitive to opioids were much more likely to be alive 10 years after cancer treatment. Women with one copy of the protective mutation were nearly twice as likely to have survived; those with two copies were four times as likely. "The results of this study," Borstov wrote, "provide support for the hypothesis that endogenous and/or exogenous opioids, acting via the mu opioid receptor, may influence cancer outcomes."

The idea that opioids might encourage cancer growth started with a 2002 laboratory report from the University of Minnesota. Later, a trial from Virginia Commonwealth University found that patients who received spinal opiates rather than systemic pain relief survived longer. Then two retrospective studies showed that breast or prostate cancer patients who received local or regional anesthesia rather than systemic morphine had improved survival after surgery.

Moss and his University of Chicago colleagues approached the issue from a similar angle. They were involved in clinical trials of methylnaltrexone, a drug designed to block the peripheral side effects of opioids, such as nausea and constipation, without disrupting pain relief. Moss noted that cancer patients receiving this peripheral opioid blocker lived longer than expected.

"These were patients with advanced cancer and a life expectancy of one to two months," Moss recalled, "yet several lived for another five or six months. It made us wonder whether this was just a consequence of better [gastrointestinal] function, or could there possibly be an effect on the tumors?"

They began a series of studies looking at the many peripheral effects of opioids and the potential benefits of blocking those effects. They found that those opioids enhanced tumor growth, angiogenesis, vascular permeability and metastasis. Drugs that blocked the opioid receptor reduced cancer growth and helped prevent invasion and metastasis. Tumors did not grow in mice that lacked the mu opioid receptor.

In his commentary, Moss summarizes results from the studies to argue that opioids - drugs like morphine or the body's own endorphins - appear to have a significant and direct proliferative effect on cancer cells, aside from their effect suppressing immunity. He suggests a possible therapeutic role for mu opioid receptor antagonists on cancer growth and metastasis, but cautions that "there are no clinical trials in humans demonstrating a direct effect."