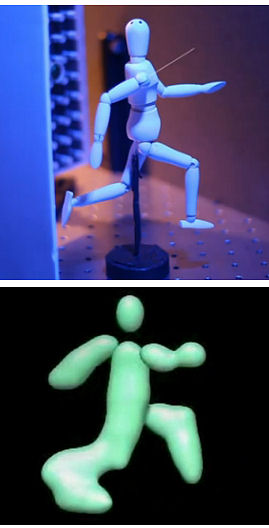 Using ordinary walls, doors or floors as reflective surfaces, MIT researchers have created a camera that produces recognizable 3-D images from outside the camera's line of sight. Describing his team's work in the journal Nature Communications, lead researcher Ramesh Raskar said the system uses a femtosecond laser, which emits bursts of light so short that their duration is measured in quadrillionths of a second.

To peer into a room that's outside its line of sight, the camera might fire femtosecond bursts of laser light at the wall opposite the doorway. The light would reflect off the wall and into the room, then bounce around and re-emerge, ultimately striking a detector that can take measurements every few picoseconds, or trillionths of a second. Because the light bursts are so short, the system can gauge how far they've traveled by measuring the time it takes them to reach the detector.

The brain-bending work of turning the raw data into an image is performed by algorithms that Raskar developed in collaboration with Andreas Velten, formerly at the MIT Media Lab; Otkrist Gupta, a graduate student in Raskar's group; Thomas Willwacher, a mathematics postdoc at Harvard University; and Ashok Veeraraghavan, an assistant professor of computer science at Rice University.

"Four years ago, when I talked to people in ultrafast optics about using femtosecond lasers for room-sized scenes, they said it was totally ridiculous," crowed Raskar, who is keen to enhance the system further. Future versions of the system, he believes, could be used by emergency responders - firefighters looking for people in burning buildings or police determining whether rooms are safe to enter - or by vehicle navigation systems, which could bounce light off the ground to look around blind corners. It could also be used with endoscopic medical devices, to produce images of previously obscure regions of the human body.