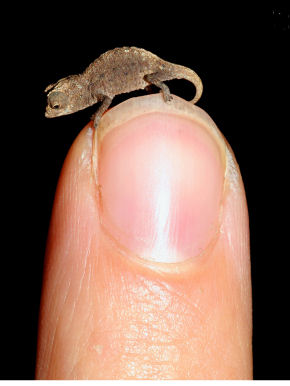 Four new species of miniaturized lizards have been identified in extreme northern Madagascar. The zoologists responsible for the discovery suggest the tiny size of the chameleons may represent an extreme case of island dwarfism.

The lizards, belonging to the Brookesia minima group, measure just tens of millimeters from head to tail and the smallest - Brookesia micra - fits comfortably on the head of a match. The study notes that Brookesia micra is only found on the tiny islet of Nosy Hara, and Glaw suggests this may indicate a range size-body size relationship in Malagasy reptiles.

Glaw goes further and speculates that the extremely small size of B. micra could represent a "double" island dwarf effect. In this scenario, Madagascar as a large island led to the evolution of the B. minima group and the isolated islet Nosy Hara might have favored the extreme miniaturization found in B. micra. To confirm such a case of double island dwarfism, future surveys are needed to clarify whether the species is truly endemic to Nosy Hara or more widely distributed.

Interestingly, Madagascar is also well known for cases of gigantism, with giant lemurs and giant tortoises being the most well known examples. Amongst the island's most prominent dwarf species is the nocturnal mouse lemur (Microcebus berthae), which is one of the smallest primates in the world.