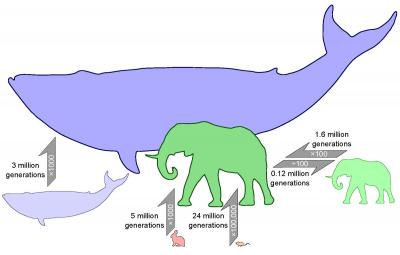 Dr Alistair Evans, of Monash University, Australia, said the study was unique because most previous work had focused on microevolution, the small changes that occur within a species. "Instead we concentrated on large-scale changes in body size. We can now show that it took at least 24 million generations to make the proverbial mouse-to-elephant size change - a massive change, but also a very long time. A less dramatic change, such as rabbit-sized to elephant-sized, takes 10 million generations."

Evans said he was most surprised to find that decreases in body size occurred more than ten times faster than the increases. "The huge difference in rates for getting smaller and getting bigger is really astounding - we certainly never expected it could happen so fast."

"They may have needed to be small to survive in their environment or perhaps food was scarce and a small stature would require less nutrients," said co-researcher Jessica Theodor, of the University of Calgary.

The study also notes that many of the miniature species lived on islands. "When you do get smaller, you need less food and can reproduce faster, which are real advantages on small islands," Evans explained.

Related:
Discuss this article in our forum
Honey, I shrunk the earthworm
Shrinking critters could derail planet's ecosystems
Balls vs Brains In Batty Battle For Evolutionary Success