Protein discovered in semen "attracts HIV like a magnet" 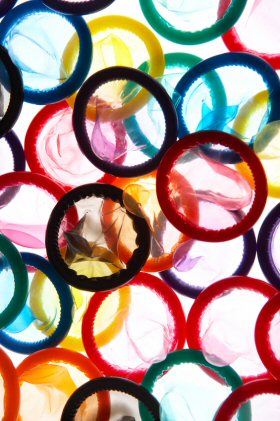 The scientists at the Gladstone Institutes who discovered new protein fragments in semen that enhance the ability of HIV to infect new cells say their work could point the way to powerful new microbicides to help curb the global spread of HIV/AIDS.

In research carried out four years ago, German researchers discovered that HIV transmission is linked to the presence of an amyloid fibril in semen. This fibril (a small, positively charged structure derived from a larger protein) promotes HIV infection by helping the virus find and attach to its target: CD4 T white blood cells.

Related work by the Gladstone team revealed the mechanism by which a positively charged fibril in semen (called SEVI) binds to the negatively charged HIV and helps to infect CD4 T cells. The researchers say it "attracts HIV like a magnet." In their latest work, appearing in Cell Host & Microbe, they identified a second set of fibrils (derived from larger proteins called semenogelins) that also enhance HIV infection.

Removing these and other positively charged components from semen diminished HIV's ability to infect CD4 T white blood cells. "Our experiments suggest that fibrils derived from semenogelins - the major component of semen - are integral to enhancing HIV infection in semen," said Gladstone's Dr. Nadia Roan. "But we are intrigued by their natural, biological function as well. The fact that these fibrils are found in male reproductive organs could point to an evolutionary role in fostering fertilization, something we're currently exploring."

The work could enable the creation of much more powerful microbicides; chemical gels that block HIV infection. "Today's microbicides may be failing because, while they do target the virus itself, they don't block the virus from interacting with the natural infection-enhancing components of semen," explained Roan. "Now that we more fully understand how HIV hijacks these components to promote its own infection, we are one step closer to developing a microbicide that can more effectively stop HIV."