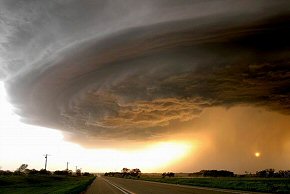 Climatologists say that aerosols (fine-particle air pollution) in the atmosphere dramatically affect cloud development to reduce precipitation in dry regions while increasing the severity of storms. Aerosols come from the combustion of fossil fuels, industrial and agricultural processes, and the accidental or deliberate burning of fields and forests. The University of Maryland-led team of researchers provide the first clear evidence of how aerosols can affect the weather; and the findings have important economic and water resource implications for regions across the United States and around the world.

"We have known for a long time that aerosols impact both the heating and phase changes [condensing, freezing] of clouds and can either inhibit or intensify clouds and precipitation," says Russell Dickerson, a professor of atmospheric and oceanic science at Maryland. "What we have not been able to determine, until now, is the net effect. This study by Zhanqing Li and his colleagues... adds urgency to the need to control sulfur, nitrogen, and hydrocarbon emissions."

The new work confirms what previous cloud modeling studies had suggested, that although clouds are influenced by many factors, increasing aerosols enhance the variability of precipitation, suppressing it when precipitation is light and intensifying it when it is strong. Aerosol particles also affect the Earth's surface temperature by either reflecting light back into space or absorbing solar radiation, thus heating the atmosphere. This variable cooling and heating is, in part, how aerosols modify atmospheric stability that dictates atmospheric vertical motion and cloud formation. Aerosols also affect cloud microphysics because they serve as nuclei around which water droplets or ice particles form.

"Both processes can affect cloud properties and rainfall," explained Li. "They may work in harmony or offset each other, leading to a complex yet inconclusive interpretation of their long-term net effect."

Worryingly, these complex interplays are completely missing from existing climate models. Until now, studies of the long-term effects of aerosols on climate change have been largely lacking and inconclusive because their mechanisms are much more sophisticated, variable, and tangled with meteorology.

"Our findings have significant policy implications for sustainable development and water resources, especially for those developing regions susceptible to extreme events such as drought and flood. Increases in manufacturing, building of power plants and other industrial developments are often accompanied with increases in pollution whose adverse impacts on weather and climate, as revealed in this study, can undercut economic gains," Li stresses.