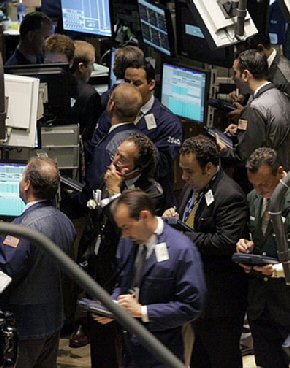 US and European scientists have proposed two different methods for detecting finance bubbles, one analyzes verb and noun usage in financial reporting and the other throws some heavy mathematics at the problem. The verdict? There isn't a gold bubble but some recent IPOs look very bubblish.

In the first study, researchers from University College Dublin found that when the language used by financial analysts and reporters becomes increasingly similar the stock market may be overheated. Using AI techniques to scan articles published by the Financial Times, The New York Times, and the BBC, they discovered that the verbs and nouns used by financial commentators converge in a "herd-like" fashion in the lead up to a stock market bubble. Immediately afterwards, the language convergence disappears. The findings were presented at the International Joint Conference on Artificial Intelligence in Barcelona, Spain.

"By plotting the distributions of words used in financial articles published online between 2006 and 2010 into a computer model, we were able to identify what we call 'verb convergence' and 'noun convergence - where the language used by financial journalists shows converging agreement," explained Professor Mark Keane. "They also appear to refer to a smaller-than-usual set of market events - presumably because of an increased fixation on a small number of rapidly rising stocks.

In the second study, appearing in the SIAM Journal on Financial Mathematics, researchers Robert Jarrow, Younes Kchia, and Philip Protter propose a mathematical model to detect financial bubbles. Protter, from Columbia University in New York, and his co-authors believe their method answers the question of whether the price increase of a particular asset represents a bubble in real time. "We show that by using tick data and some statistical techniques, one is able to tell with a large degree of certainty, whether or not a given financial asset - or group of assets - is undergoing bubble pricing," he explained.

Their method addresses the bubble question by estimating an asset's price volatility, which is stochastic or randomly determined. The authors define an asset's price process in terms of a standard stochastic differential equation, which is driven by Brownian motion (a natural process involving the erratic, random movement of small particles suspended in gas or liquid). The concept is specifically used to model instances where previous change in the value of a variable is unrelated to past changes.

The key characteristic, says Protter, is the volatility of an asset's price, which, in the case of bubbles is very high. The authors estimate the volatility by applying estimators to real-time tick price data for a given stock. They then obtain the best possible extension of this data for large values using a technique called Reproducing Kernel Hilbert Spaces (RKHS), which is a widely used method for statistical learning.

The authors have also used the model to test more recent price increases. "We have found, for example, that the IPO of LinkedIn underwent bubble pricing at its debut, and that the recent rise in gold prices was not a bubble, according to our models," Protter says.