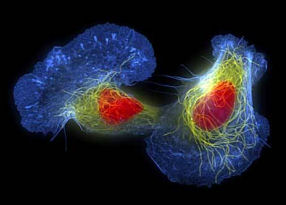 By genetically modifying normally "unexcitable" cells, Duke University bioengineers have turned them into cells capable of generating and passing electrical current; a breakthrough which could have broad implications in treating diseases of the nervous system or the heart.

"By introducing only three specific ion channels, we were able to give normally electrically inactive cells the ability to become electrically excitable," said researcher Rob Kirkton. "We also demonstrated proof-of-concept experiments in which these modified cells were able restore large electrical gaps within and between rat heart cells."

The Duke scientists say that their engineered excitable cells can be continuously and easily grown in the lab, are genetically and functionally identical to each other, and also have the capacity for further modifications to change their electrical or structural behavior. "These cells can be used in the laboratory as a platform for investigating the roles that specific ion channels have in tissue-level bioelectricity as well as testing the effectiveness of new drugs or therapies on bioelectrical activity," Kirkton said.