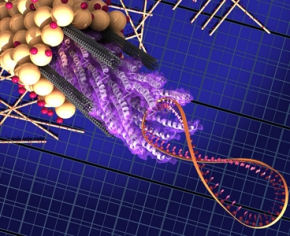 The new construction technique, reported in the journal Nature Nanotechnology, is based on previous research that showed how carbon nanotubes (microscopic, hollow cylinders of pure carbon) can enhance collection efficiency on a solar cell's surface.

To solve these issues, researchers Xiangnan Dang, Hyunjung Yi and Angela Belcher, used a genetically engineered version of a virus called M13 to control the arrangement of the nanotubes. The virus keeps the tubes separate so they don't clump together and can't create short-circuits.

The researchers tested the technique using a type of solar cell known as a dye-sensitized solar cell. In their tests, adding the virus-built structures enhanced the power conversion efficiency to 10.6 percent from 8 percent - almost a one-third improvement.

The improvement takes place even though the viruses and the nanotubes make up only 0.1 percent by weight of the finished cell. "A little biology goes a long way," Belcher says.

The viruses actually perform two different functions. First, they possess short proteins called peptides that can bind tightly to the carbon nanotubes, holding them in place and keeping them separated from each other. Each virus can hold five to 10 nanotubes, each of which is held firmly in place by about 300 of the virus's peptide molecules. In addition, the virus was engineered to produce a coating of titanium dioxide (TiO2), a key ingredient for dye-sensitized solar cells, over each of the nanotubes, putting the titanium dioxide in close proximity to the wire-like nanotubes that carry the electrons.

The two functions are carried out in succession by the same virus, whose activity is "switched" from one function to the next by changing the acidity of its environment. This switching feature is an important new capability that has been demonstrated for the first time in this research, says Belcher.