Women: they don't make 'em like they used to 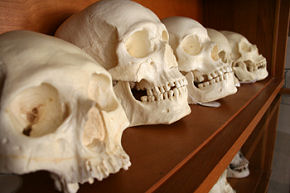 Principal researcher, Dr. Ann Ross, said that craniofacial differences between contemporary men and women are less pronounced than they were in the 16th century. While craniofacial features for both sexes in Spain have changed over time, she explained, the changes have been particularly significant in females. "For example, the facial structure of modern Spanish females is much larger than the structure of 16th century females. This difference may stem from improved nutrition or other environmental factors," she suggested.

Assessing the 16th century skulls was significant for the researchers as it allowed them to determine how the different features of male and female skulls have changed over time. "This has applications for characterizing older remains," Ross says. "Applying 20th century standards to historical remains could be misleading, since sex differences can change over time - as we showed in this study."

Ross said the researchers paid particular attention to structural differences between male and female skulls because; "this can help us establish the sex of the remains based on their craniofacial features, which is particularly important when an incomplete skeleton is found. Being able to tell if a skull belonged to a man or woman is useful in both criminal investigation and academic research."