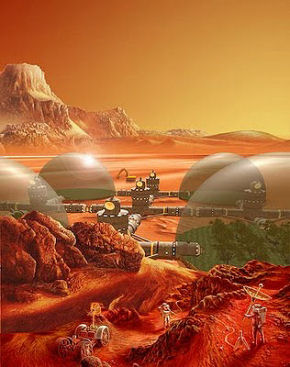 Fancy watching the sun rise over Olympus Mons? Or perhaps taking a stroll across the vast plains of the Vastitas Borealis? The only catch is you can never return to Earth.

In a paper published in the Journal of Cosmology, scientists Dirk Schulze-Makuch and Paul Davies contend that while a manned mission to Mars and back is unlikely to lift off anytime soon, a one-way trip could be the ideal way to kick-start the colonization of the red planet. Their paper points out that the greatest portion of the expense in a return mission is tied up in safely returning the crew and spacecraft to Earth.

"We envision that Mars exploration would begin and proceed for a long time on the basis of outbound journeys only," said Schulze-Makuch, an associate professor at Washington State University. "One approach could be to send four astronauts initially, two on each of two space craft, each with a lander and sufficient supplies, to stake a single outpost on Mars. A one-way human mission to Mars would be the first step in establishing a permanent human presence on the planet."

"It would really be little different from the first white settlers of the North American continent, who left Europe with little expectation of return," said Davies, a cosmologist at Arizona State University. "Explorers such as Columbus, Frobisher, Scott and Amundsen, while not embarking on their voyages with the intention of staying at their destination, nevertheless took huge personal risks to explore new lands, in the knowledge that there was a significant likelihood that they would perish in the attempt."

He adds that the astronauts would be re-supplied on a periodic basis from Earth with basic necessities, but otherwise would be expected to become increasingly proficient at harvesting and utilizing resources available on Mars. Eventually the authors envision that outpost would reach self-sufficiency, and then it could serve as a hub for a greatly expanded colonization program.

In a back-to-the-future touch, the paper suggests that caves might provide ideal shelter for the intrepid spacefarers. "Mars has natural and quite large lava caves, and some of them are located at a low elevation in close proximity to the former northern ocean, which means that they could harbor ice deposits inside similar to many ice-containing caves on Earth," said Schulze-Makuch. "Ice caves would go a long way to solving the needs of a settlement for water and oxygen. Mars has no ozone shield and no magnetospheric shielding, [so] ice caves would also provide shelter from ionizing and ultraviolet radiation."

As well as offering humanity a "lifeboat" in the event of a mega-catastrophe on Earth, suggest the authors, a Mars colony would also have major beneficial political and social implications for Earth, and serve as a strong unifying and uplifting theme for all humanity.

And it doesn't appear that there would be any shortage of volunteers. "Informal surveys conducted after lectures and conference presentations on our proposal have repeatedly shown that many people are willing to volunteer for a one-way mission, both for reasons of scientific curiosity and in a spirit of adventure and human destiny," the authors note.