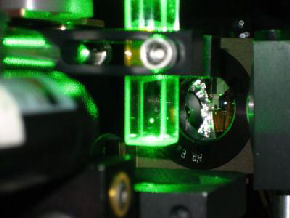 A hundred years after Albert Einstein said we would never be able to observe the instantaneous velocity of tiny particles undergoing Brownian motion, a group of Texan physicists led by Mark Raizen has done so. "This is the first observation of the instantaneous velocity of a Brownian particle," says Raizen, a professor of physics at The University of Texas at Austin. "It's a prediction of Einstein's that has been standing untested for 100 years. He proposed a test to observe the velocity in 1907, but said that the experiment could not be done."

"We've now observed the instantaneous velocity of a Brownian particle," says Raizen. "In some sense, we're closing a door on this problem in physics. But we are actually opening a much larger door for future tests of the equipartition theorem at the quantum level." There, he expects that equipartition theory will break down, leading to new problems and solutions surrounding the quantum mechanics of small particles composed of many atoms.