You are here: Home › News › Researchers say results from experimental nanoparticle cancer treatment are “game changing”
By Will Parker on March 22, 2010 in News 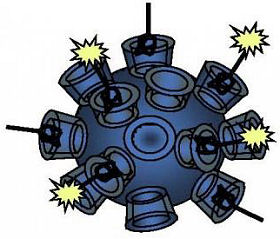 A California Institute of Technology (Caltech) led team of researchers has published the first proof that a targeted nanoparticle – injected directly into a patient’s bloodstream – can enter into cancer tumors, deliver double-stranded small interfering RNAs, and turn off an important cancer gene using a mechanism known as RNA interference (RNAi).

According to Caltech’s Mark Davis, the new findings demonstrate the feasibility of using both nanoparticles and RNAi-based therapeutics in patients, and open the door for future “game-changing” therapeutics that attack cancer and other diseases at the genetic level.

“RNAi is a new way to stop the production of proteins,” explains Davis. What makes it such a potentially powerful tool, he adds, is the fact that its target is not a protein. The vulnerable areas of a protein may be hidden within its three-dimensional folds, making it difficult for therapeutics to reach them. In contrast, RNAi targets the messenger RNA (mRNA) that encodes the information needed to make a protein in the first place.

“In principle,” says Davis, “that means every protein now is druggable because its inhibition is accomplished by destroying the mRNA. And we can go after mRNAs in a very designed way given all the genomic data that are and will become available.”

“This research provides the first evidence that what works in the lab could help patients in the future by the specific delivery of siRNA using targeted nanoparticles. We can start thinking about targeting the untargetable,” notes co-researcher Antoni Ribas.

“At the very least, we’ve proven that the RNAi mechanism can be used in humans for therapy and that the targeted delivery of siRNA allows for systemic administration,” Davis added. “It is a very exciting time.”