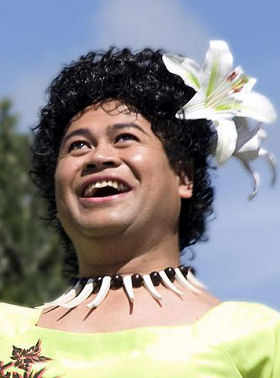 Male homosexuality doesn't make complete sense from an evolutionary point of view but a new study suggests that it may convey an indirect benefit by enhancing the survival prospects of close relatives. The study hypothesizes that homosexual men enhance their own genetic prospects by acting altruistically toward their nieces and nephews, thereby perpetuating some of their genes through the family line.

Evolutionary psychologists Paul Vasey and Doug VanderLaan, from the University of Lethbridge (Canada), have been examining this idea for several years on the Pacific island of Samoa. They chose Samoa because males who prefer men as sexual partners are widely recognized and accepted there as a distinct gender category known as fa'afafine (meaning neither man nor woman). Fa'afafine tend to be effeminate and exclusively attracted to adult men as sexual partners.

Past research has shown that the fa'afafine are much more altruistically inclined toward their nieces and nephews than either Samoan women or heterosexual men. They are willing to babysit, tutor their nieces and nephews in art and music, and help out financially - often paying for medical care and education. In the new study, the scientists set out to unravel the psychology of the fa'afafine, to see if their altruism is targeted specifically at kin rather than children in general.

The researchers recruited a large sample of fa'afafine, and comparable samples of women and heterosexual men. They gave them all a series of questionnaires, measuring their willingness to help their nieces and nephews in various ways and also their willingness to do these things for other, unrelated kids.

The findings, reported in the journal Psychological Science, lend strong support to the kin selection concept. Compared to Samoan women and heterosexual men, the fa'afafine showed a much weaker link between their avuncular - or uncle like - behavior and their altruism toward kids generally. This cognitive dissociation, the scientists argue, allows the fa'afafine to allocate their resources more efficiently and precisely to their kin, and thus enhance their own evolutionary prospects.

In evolutionary terms, to compensate for being childless, each fa'afafine would have to somehow support the survival of two additional nieces or nephews who would otherwise not have existed. "If kin selection is the sole mechanism by which genes for male same-sex sexual attraction are maintained over time, the fa'afafine must be 'super uncles' to earn their evolutionary keep," explains Vasey. Consequently, Vasey suggests "that the fa'afafine's avuncularity probably contributes to the evolutionary survival of genes for male same-sex sexual attraction, but is unlikely to entirely offset the costs of not reproducing."

Vasey notes that in the Western world, families are more geographically dispersed, diminishing the role that homosexual kin can play in the extended family. But in this sense, the researchers contend, Samoa's communitarian culture may be more - not less - representative of the environment in which male same-sex sexuality evolved in ancient times. In that sense, muses Vasey, it's not the "bachelor uncle" who is poorly adapted to the world, but rather the modern Western world that has evolved into a place where family is less valued.