You are here: Home › News › No end in sight for Alaskan coastal erosion
By Will Parker on December 15, 2009 in News 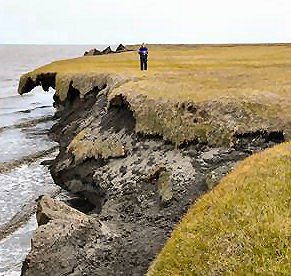 Thanks to a “triple whammy” of declining sea ice, warming seawater and increased wave activity, the northern coastline of Alaska between Point Barrow and Prudhoe Bay is retreating at 30 to 45 feet a year – and University of Colorado researchers say there’s no end in sight to the fast-paced erosion. The research team, led by Robert Anderson, presented their study into the rapidly disappearing Arctic coastline at the annual meeting of the American Geophysical Union yesterday.

The 12-foot-high bluffs of the affected coastline are frozen blocks of silt and peat. Containing up to 80 percent ice, they are particularly vulnerable to a combination of large waves and warm seawater. Once the blocks have fallen, the coastal seawater melts them in a matter of days, sweeping the silty material out to sea.

The researchers say that longer ice-free summer conditions and warmer seawater bathing the coast are the chief culprits, while the third factor is that the longer the sea ice is detached from the coastline, the further out to sea the sea-ice edge will be. This open-ocean distance between the sea ice and the shore, known as the “fetch,” increases both the energy of waves crashing into the coast and the height to which warm seawater can come into contact with the frozen bluffs.

“What we are seeing now is a triple whammy effect,” said Anderson. “Since the summer Arctic sea ice cover continues to decline and Arctic air and sea temperatures continue to rise, we really don’t see any prospect for this process ending.”

Anderson explained that the shoreline bluffs are made up of contiguous, polygon-shaped blocks primarily made of permafrost and each roughly 70 to 100 feet across. Ice wedges, created by seeping summer surface water that annually freezes and thaws, are driven deeper and deeper into the cracks between individual blocks each year. “The blocks closest to the sea are undermined as warm seawater melts their base, and eventually split apart from neighboring blocks and topple during stormy conditions,” said Anderson.

The researchers used a variety of instruments and methods to examine the dynamics between the land and the sea, including time-lapse photography of shoreline erosion, global positioning systems, meteorological measurements and sediment analyses of the coastal bluffs. Offshore measurements included sea-ice distribution, ocean floor depth, sea-surface temperatures and wave dynamics.

The time-lapse images were taken with four tripod mounted cameras that snapped pictures every six hours during the 24-hour summer daylight months to track the effects of the waves on the coastline. “Once one of these blocks topples, the process continues on to the next block,” Anderson said. “These images are very powerful, because they pick up activity during severe storms when we aren’t there to watch.”

While there are no towns adjacent to the specific study area, the erosion is threatening abandoned military and petroleum infrastructure. Erosion is also occurring at similar sites elsewhere along Alaska’s coastline. At the Alaskan town of Kaktovik bank stabilization measures using sandbags have been undertaken in an attempt to slow the problem.