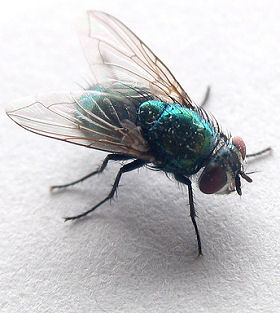 Scientists have directly manipulated the activity of individual neurons to give flies memories of a bad experience they never really had, according to a report in the journal Cell.

"Flies have the ability to learn, but the circuits that instruct memory formation were unknown," said researcher Gero Miesenböck, of the University of Oxford. "We were able to pin the essential component down to 12 cells. It's really remarkable resolution."

According to Miesenböck, those dozen cells are sufficient to manage what is a difficult cognitive problem: learning to associate a particular odor with something bad, like an electric shock. In essence, these cells create memories that the fly then uses to avoid that odor.

To pinpoint the exact neurons responsible for this memory among thousands in the fly brain, the researchers developed a technique they call optogenetics, in which a simple flash of light is used to release caged-molecules present in selective neurons that then stimulate the activity of those neurons. Miesenböck provides the analogy that if you wanted to send a message only to certain inhabitants of a city, you would give those you wanted to reach a radio tuned to the right frequency and send the message openly over the airwaves.

Initially, the team made some educated guesses about the parts of the brain that would be important for the flies' learning task. From there, they were able to narrow it down through experimentation to the 12-neuron brain circuit. Remarkably, stimulating just these neurons gives the flies a memory of an unpleasant event that never occurred.

"We like to take seemingly lofty psychological phenomena and reduce them to mechanics, to see for example how the intelligence needed to adapt to a changing environment can be reduced to physical interactions between cells and molecules," Miesenböck said. "The question is: 'How do you get intelligence from parts that are unintelligent?'"

Using their approach to "write directly to memory," the scientists can now obtain a level of evidence about brain function that was previously not possible. Miesenböck notes that neuroscience for a long time depended primarily on recording neural activity and attempting to correlate it to perceptions, actions, and cognition. "It's more powerful to seize control of the relevant brain circuits and produce these states directly," he contends.