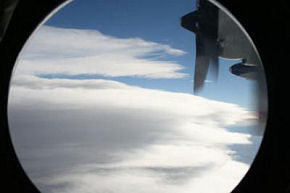 A new study is the first to yield direct data on how bacteria, fungal spores and plant material influence cloud formation at high altitudes. The researchers, led by Kimberly Prather and Kerri Pratt of the University of California at San Diego, sampled water droplet and ice crystal residues at high speeds while flying through clouds in the skies over Wyoming. "If we understand the sources of the particles that nucleate clouds, and their relative abundance, we can determine their impact on climate," said Pratt.

Analysis of the ice crystals revealed that the particles that started their growth were made up almost entirely of either dust or biological material such as bacteria, fungal spores and plant material. While it has long been known that microorganisms become airborne and travel great distances, this study is the first to yield direct data on how they work to influence cloud formation. Results from the experiment appear in the journal Nature Geoscience.

The researchers performed in-situ measurements of cloud ice crystal residues and found that half were mineral dust and about a third were made up of inorganic ions mixed with nitrogen, phosphorus and carbon - the signature elements of biological matter. The second-by-second speed of the analysis allowed the researchers to make distinctions between water droplets and ice particles. Ice nuclei are rarer than droplet nuclei.

The team demonstrated that both dust and biological material indeed form the nuclei of these ice particles, something that previously could only be simulated in laboratory experiments. "This has really been kind of a holy grail measurement for us," said Prather. "Understanding which particles form ice nuclei, and which have extremely low concentrations and are inherently difficult to measure, means you can begin to understand processes that result in precipitation. Any new piece of information you can get is critical."