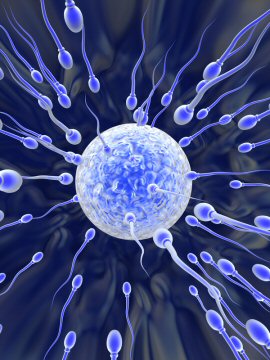 Reporting their findings in the journal Intelligence, researchers from the Institute of Psychiatry in the UK say that men with higher intelligence tend to produce better quality sperm. This, say the researchers, suggests a closer-than-expected relationship between intelligence and evolutionary fitness.

The intelligence/sperm analysis was conducted as a precursor to possible further study involving the associations between intelligence, health, fertility, and overall fitness. In other words, the likelihood of surviving and reproducing under evolutionarily-typical conditions.

The researchers found that, independently of age and lifestyle, intelligence was correlated with all three measures of semen quality. The correlations were small but highly statistically significant, according to lead researcher Rosalind Arden. "This does not mean that men who prefer Play-Doh™ to Plato always have poor sperm: the relationship we found was marginal. But our results do support the theoretically important 'fitness factor' idea. We look forward to seeing if the results can be replicated in other data sets," she added.

"We were interested in testing the idea that if most of our genes act on many characteristics, there might be a weak, but discoverable, relationship right across all of our characteristics - from nose to toes. This set of weak relationships would give rise to a 'fitness factor' in evolutionary terms," concluded Arden.