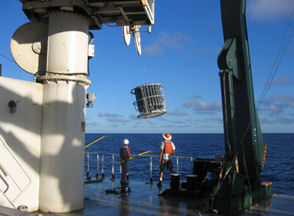 A newly discovered microorganism that lives in the open ocean is able to "fix" nitrogen but does not rely on photosynthesis for energy, forcing scientists to revise their understanding of how carbon and nitrogen cycle through ocean ecosystems.

Researcher Jonathan Zehr, a marine scientist at the University of California, Santa Cruz, describes the organism as a member of the cyanobacteria family, but unlike all other known free-living cyanobacteria, this one lacks some of the genes needed to carry out photosynthesis, the process by which plants use light energy to make sugars out of carbon dioxide and water. The mysterious microbe can do something very important, though: It provides natural fertilizer to the oceans by "fixing" nitrogen from the atmosphere into a form useable by other organisms. "For it to have such an unusual metabolism is very exciting," Zehr said. "We're trying to understand how something like this can live and grow with so many missing parts."

While 80 percent of the Earth's atmosphere is nitrogen, most organisms cannot use it unless it is "fixed" to other elements to make molecules like ammonia and nitrate. Because nitrogen is essential for all forms of life, nitrogen fixation is a major factor controlling overall biological productivity in the oceans. And according to Zehr, the new microbe is an abundant nitrogen fixer.

Without photosynthesis, the organism can't take carbon dioxide from the atmosphere and convert it into sugars, so it's not clear how the new microbe feeds itself. Zehr speculates that either it has some way of feeding on organic matter in its environment, or, it lives in close association with other organisms that provide it with food. "It would make a perfect symbiont because it could feed nitrogen to its host and live on the carbon provided by the host," he said.

Zehr said he plans to continue research on the new microbe and fill some gaps in the present knowledge. He is also interested in how its metabolism differs from other known cyanobacteria. If it can be cultured, there may be ways to exploit this organism's unusual metabolism in biotechnology applications, he concluded.