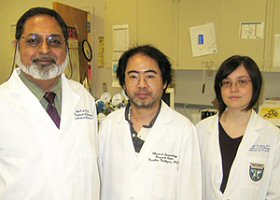 HIV researchers at The University of Texas Medical School at Houston (UT Medical) believe they have uncovered the Achilles heel in the armor of the HIV virus. The weak spot is hidden in the HIV envelope protein gp120, essential for HIV's attachment to host cells.

Normally, the body's immune defenses can ward off viruses by making proteins called antibodies that bind the virus. However, HIV is a constantly changing and mutating virus, and the antibodies produced after infection do not control disease progression to AIDS. For the same reason, no HIV preventative vaccine that stimulates production of protective antibodies is available.

The Achilles heel, a tiny stretch of amino acids numbered 421-433 on gp120, is now under study as a target for therapeutic intervention. "Unlike the changeable regions of its envelope, HIV needs at least one region that must remain constant to attach to cells. If this region changes, HIV cannot infect cells. Equally important, HIV does not want this constant region to provoke the body's defense system. So, HIV uses the same constant cellular attachment site to silence B lymphocytes - the antibody producing cells. The result is that the body is fooled into making abundant antibodies to the changeable regions of HIV but not to its cellular attachment site. Immunologists call such regions superantigens. HIV's cleverness is unmatched. No other virus uses this trick to evade the body's defenses," explained UT Medical's Sudhir Paul (pictured above left).

Paul's paper, published in the journal Autoimmunity Reviews, explains how his team has engineered antibodies with enzymatic activity, also known as abzymes, which can attack the Achilles heel of the virus in a precise way. "The abzymes recognize essentially all of the diverse HIV forms found across the world. This solves the problem of HIV changeability. The next step is to confirm our theory in human clinical trials," Paul said.

The abzymes are derived from HIV negative people with the autoimmune disease lupus and a small number of HIV positive people who do not require treatment and do not get AIDS (non-progressors). "We discovered that disturbed immunological events in lupus patients can generate abzymes to the Achilles heel of HIV. The human genome has accumulated over millions of years of evolution a lot of viral fragments called endogenous retroviral sequences. These endogenous retroviral sequences are overproduced in people with lupus, and an immune response to such a sequence that resembles the Achilles heel can explain the production of abzymes in lupus. A small minority of HIV positive people also start producing the abzymes after decades of the infection. The immune system in some people can cope with HIV after all," said co-researcher Stephanie Planque.

The abzymes are now under development for HIV immunotherapy by infusion into blood. They could also be used to guard against sexual HIV transmission as topical vaginal or rectal formulations. "We have learned a lot from this research about how to induce the production of the protective abzymes on demand. This is the Holy Grail of HIV research -- development of a preventative HIV vaccine," concluded Paul.