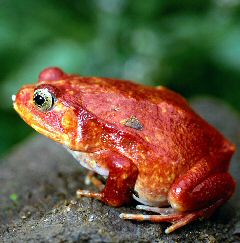 University of Florida (UF) zoologists have found that toads in busy suburban areas are less likely to suffer from reproductive system abnormalities than toads near farms - where some of the amphibians they examined had both testes and ovaries. The new study is likely to have wide implications for the longstanding debate over whether agricultural chemicals pose a threat to amphibians, with UF researcher Lou Guillette noting that; "as you increase agriculture you have an increasing number of abnormalities."

Several past studies have suggested a link between herbicides commonly used in farming and sexual abnormalities in tadpoles and frogs. Such deformities may be responsible for declines in frogs documented in areas affected by agricultural contaminants, such as Sierra Nevada, California.

Past research has compared frogs collected from natural areas with those collected from agricultural areas. Other efforts have pointed to specific chemicals, including the herbicide Atrazine, as causing abnormalities. The UF study is the first peer-reviewed study to compare abnormalities in wild toads (Bufo marinus) from heavily farmed areas with frogs from both partially farmed and completely suburban areas. In so doing, it highlights the difference between the impact of agriculture versus development.

"Our study is the first to explicitly ask, of these two areas of human disturbance, do we see a greater proportion of abnormal animals in one versus another?" Guillette said. Importantly, because the results implicate agriculture, future research can narrow the focus to agricultural chemicals. "Because we know what chemicals are used at these agricultural sites, we can begin to pin down the chemical cause of these abnormalities by conducting controlled experiments with each chemical alone and in combination," explained co-researcher Krista McCoy.

The study, published in Environmental Health Perspectives, revealed a pattern that showed that the more agricultural the land was, the more sexual organ abnormalities or so-called "intersex" toads (toads who have both female and male internal reproductive organs) there were. While normal male toads' forelimbs are thicker and stronger than those of their female counterparts, more of the intersex frogs only found in agricultural areas had thin, weak forearms. Also, intersexes had fewer "nuptial pads," areas of scrappy skin on their feet used to grip females during copulation.

Internally, the more agricultural the sites, the more feminized the males' reproductive organs. Many had both ovaries and testes. Not only that, both the impacted males and the intersex frogs had less of the male hormone testosterone than normal males, suggesting diminished reproductive capabilities, Guillette said.

Guillette and McCoy said the study's results may have important implications not only for other wild species, but also for people. "What we are finding in Bufo marinus might also occur in other animals, including other amphibian species and humans," McCoy said. "In fact, reproductive abnormalities are increasing in humans and these increases could partially be due to exposure to pesticides."