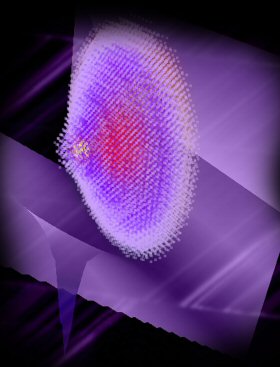 Reporting in Nature Physics, Purdue University researchers say they have created a hybrid molecule whose associated quantum state can be intentionally manipulated with an externally applied electrical field - a required step in the construction of a quantum computer.

Physicist Lloyd Hollenberg and colleagues at the University of Melbourne in Australia were able to construct a theoretical silicon-based quantum computer chip based on the concept of using an individual impurity. "The team found that the measurements only made sense if the molecule was considered to be made of two parts," Hollenberg says. "One end comprised the arsenic atom embedded in the silicon, while the 'artificial' end of the molecule forms near the silicon surface of the transistor. A single electron was spread across both ends. What is strange about the 'surface' end of the molecule is that it occurs as an artifact when we apply electrical current across the transistor and hence can be considered 'manmade.' We have no equivalent form existing naturally in the world around us."

Klimeck then developed an updated simulation of the material at the size of 3 million atoms. "We needed to model such a large number of atoms to see the new, extended quantum characteristics," Klimeck explained. The simulation showed that the new molecule is a hybrid, with the naturally occurring arsenic at one end in a normal spherical shape and a new, artificial atom at the other end in a flattened, 2-D shape. By controlling the voltage, the researchers found that they could make an electron go to either end of the molecule, or, exist in an intermediate quantum state.