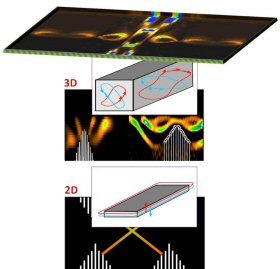 The quantum-Hall effect (where electrons condense into an exotic quantum fluid) was thought to only occur in specially prepared materials under the influence of an intense magnetic field, but Princeton University researchers have observed the effect in a bulk crystal of bismuth-antimony without any magnetic field being present.

In 1879 Edwin Hall discovered that in a magnetic field, electrons behave like a cloud of mosquitoes in a crosswind. In a conductive material the magnetic "wind" pushes the electrons to the edges and an electrical voltage rises in the direction of the wind - at right angles to the direction of the current flow. A century later, the German physicist Klaus von Klitzing studied the Hall effect further by "enclosing" the electrons in an atom-thin layer and cooling them to near absolute-zero in very powerful magnetic fields. With the electrons forced to move in a plane, he found their behavior changed in discrete steps, meaning that the voltage increased in chunks, rather than increasing bit by bit as it was expected to. His work won him the Nobel Prize in physics in 1985.

Similar experiments carried out by US researchers in 1982 revealed something new. The electrons in the atom-thin layer seemed to "cooperate" and work together to form what scientists call a quantum fluid, an extremely rare scenario where electrons act identically in lock-step, more like a soup than individually spinning units. The researchers devised a model that resembled a storm at sea in which the force of the magnetic wind and the electrons of this quantum fluid created new phenomena - eddies and waves - without being changed themselves. Simply put, they showed that the electrons in a powerful magnetic field condensed to a form much like the quantum fluids that occur in superconductivity and in liquid helium.

Now, the Princeton team of scientists report that they have recorded this exotic behavior in a bulk crystal of bismuth-antimony without any external magnetic field being present. The work, while significant in a fundamental way, could also lead to advances in new kinds of fast quantum or spintronic computing devices, of potential use in future electronic technologies. Reporting the findings in Nature, Princeton researcher Zahid Hasan said the team used a high-energy, accelerator-based technique called "synchrotron photo-electron spectroscopy" to find the effect.

The new work builds upon previous research that predicted that electrons should be able to form a Hall-like quantum fluid even in the absence of an externally applied magnetic field, in special materials where certain conditions of the electron orbit and the spinning direction are met. The electrons in these special materials are expected to generate their own internal magnetic field when they are traveling near the speed of light and are subject to the laws of relativity.

"What is exciting about this new method of looking at the quantum Hall-like behavior is that one can directly image the electrons on the edges of the sample, which was never done before," said Hasan. "This very direct look opens up a wide range of future possibilities for fundamental research opportunities into the quantum Hall behavior of matter."