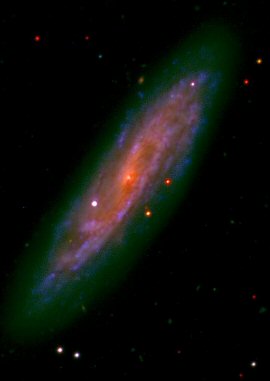 The Large Binocular Telescope (LBT) on Mount Graham, in Arizona, has captured images using its twin primary mirrors together for the first time, achieving first "binocular" light. First binocular light is a milestone not only for the LBT - now the world's most powerful telescope - but for astronomy itself, say the international group of partners in the project.

The LBT has a light-collecting area equivalent to a single 11.8-meter (39-foot) surface and will combine light to produce the image sharpness equivalent to a single 22.8-meter (75-foot) telescope. "To have a fully functioning binocular telescope is not only a time for celebration here at LBT, but also for the entire astronomy community," said Observatory Director Peter A. Strittmatter. "The images that this telescope will produce will be like none seen before. The power and clarity of this machine is in a class of its own. It will provide unmatched ability to peer into history, seeing the birth of the universe."

"Among astronomy projects, the LBT gives me the most satisfaction, because it is very revolutionary, and because it has given Arizona the largest and the best telescope in the world," Angel said. "When all the pieces are in place, the LBT will take images sharper than any other telescope. I think it's the most likely telescope to take the first pictures of planets around other stars because of the unique advanced technologies used to build it."