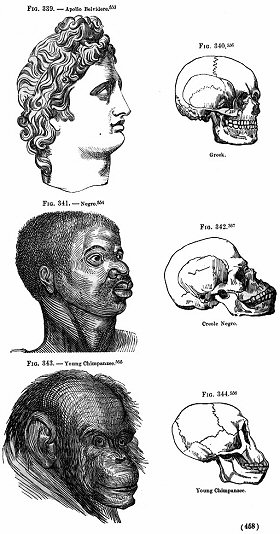 New research by psychologists at Stanford, Pennsylvania State University and the University of California-Berkeley reveals that many Americans subconsciously associate blacks with apes. The findings also show that people are more likely to condone violence against black criminal suspects as a result of their broader inability to accept African Americans as fully human, say the researchers.

The research took place over six years at Stanford and Penn State under Eberhardt's supervision. The subjects were mostly white male undergraduates who were subliminally flashed black or white male faces on a screen for a fraction of a second before being asked to identify blurry ape drawings. The results showed that the subjects identified the drawings much faster after they were primed with black faces rather than with white faces.

"This was actually some of the most depressing work I have done," said Eberhardt. "This shook me up. You have suspicions when you do the work - intuitions - you have a hunch. But it was hard to prepare for how strong [the black-ape association] was - how we were able to pick it up every time," lamented Eberhardt. "African Americans are still dehumanized; we're still associated with apes in this country."

The paper also reported on another experiment where the researchers subliminally primed 115 white male undergraduates with words associated with either apes (such as "monkey," "chimp," "gorilla") or big cats (such as "lion," "tiger," "panther"). The latter was used as a control because both images are associated with violence and Africa, Eberhardt noted. The subjects then watched a two-minute video clip, similar to the television program COPS, depicting several police officers violently beating a man of undetermined race. A mugshot of either a white or a black man was shown at the beginning of the clip to indicate who was being beaten, with a description conveying that, although described by his family as "a loving husband and father," the suspect had a serious criminal record and may have been high on drugs at the time of his arrest.

The students were then asked to rate how justified the beating was. Participants who believed the suspect was white were no more likely to condone the beating when they were primed with either ape or big cat words. But those who thought the suspect was black were more likely to justify the beating if they had been primed with ape words than with big cat words. "Taken together, this suggests that implicit knowledge of a Black-ape association led to marked differences in participants' judgments of Black criminal suspects," the researchers noted.

The link has devastating consequences for African Americans because it "alters visual perception and attention, and it increases endorsement of violence against black suspects," said the researchers.

Eberhardt believes that two stories of race exist in America. "One is about the disappearance of bias - that it's no longer with us," she said. "But the other is about the transformation of bias. It's not the egregious bias anymore, but it's modern bias, subtle bias. We want to argue, with this work, that there is one old race battle that we're still fighting. That is the battle for blacks to be recognized as fully human."