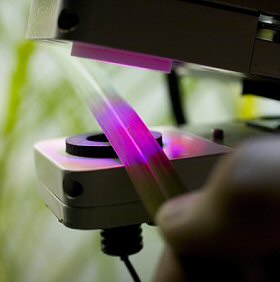 Researcher Steve Long said that the research team wanted to find out if they could "do better" than the plant in terms of productivity. Because of the complexity of photosynthesis, the researchers opted to build a computer model rather than experiment with actual plants.

Using evolutionary algorithms the model hunted for enzymes that - if increased - would enhance plant productivity. If higher concentrations of an enzyme relative to others improved photosynthetic efficiency, the model used the results of that experiment as a parent for the next generation of tests.

The researchers thus identified several proteins that could, if present in higher concentrations relative to others, greatly enhance the productivity of the plant. The new findings are consistent with results from other researchers, who found that increases in one of these proteins in transgenic plants increased productivity. "By rearranging the investment of nitrogen, we could almost double efficiency," Long said.

So, why haven't plants already evolved to be as efficient as possible? "The answer may lie in the fact that evolution selects for survival and fecundity, while we were selecting for increased productivity," Long mused. So while the changes suggested in the model might undermine the survival of a plant living in the wild, they should keep the plant viable in the farmer's field.