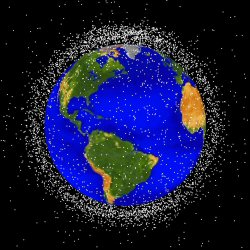 Earlier this year, China deliberately destroyed one of its own weather satellites in orbit; an act which some analysts suggested could re-ignite the techno-political brouhaha about armaments in space. But two researchers believe that satellite-killing capability is not solely the preserve of super-powers, and is well within the reach of amateurs. Adrian Gheorghe and Dan Vamanu, writing in the International Journal of Critical Infrastructures, contend that military satellites, global positioning systems, weather satellites and even satellite TV systems could all become victims of such an attack.

Accuracy and elegance are not issues in carrying out a satellite attack, the researchers note. In fact, all it would take to succeed with an amateurish, yet effective anti-satellite attack would be the control of an intermediate range missile (well within the reach of many nations and organizations with sufficient funds), and a college-level team dedicated to the cause. "Any country in possession of intermediate range rockets may mount a grotesquely unsophisticated attack on another's satellites given the political short-sightedness that would be blind to a potentially devastating retaliation," Gheorghe and Vamanu contend.

"While it may be true that, when it comes to nuts and bolts, things may not be quite as simple as they sound here, the bare fact remains - it can be done," they conclude, suggesting that the risk of deliberate satellite sabotage should be placed higher on the security agenda.

Related articles:
In Space, No One Can Hear You Say "Doh!"
Where Do Rusty Rockets Go When They Die?
Into Orbit Via A Slingshot