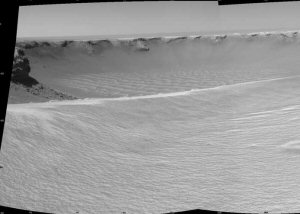 NASA's enduring and plucky Mars rover, Opportunity, has arrived at the rim of Victoria Crater. Initial images from the rover show rugged walls with layers of exposed rock and a floor blanketed with dunes. The far wall is approximately 800 meters (1/2 mile) from the rover.

"This is a geologist's dream come true," said Dr. Steve Squyres, principal investigator for NASA's two rovers. "Those layers of rock, if we can get to them, will tell us new stories about the environmental conditions long ago. We especially want to learn whether the wet era that we found recorded in the rocks closer to the landing site extended farther back in time. The way to find that out is to go deeper, and Victoria may let us do that."

Opportunity has been noodling around Mars since January 2004, covering more than 9.2 kilometers (5.7 miles). Most of that distance was to get from the original landing spot to Victoria Crater, a journey that involved frequent stops to examine intriguing rocks and other geological features.

"The rover that takes a lickin' but keeps on tickin,'" is how NASA's rover mission manager, Cindy Oda, describes Opportunity. "It continues to overcome all challenges despite its aging parts and difficult terrain. We are looking forward to exciting new discoveries as Opportunity begins its new adventure exploring Victoria Crater."

Meanwhile, the other Mars rover, Spirit, sits halfway around Mars in a stationary northward-tilted position in order to collect the maximum energy possible. Mission controllers hope it will begin driving again when the Martian spring increases the amount of solar power available.