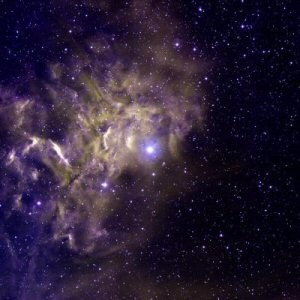 Scientists believe deuterium was created a few instants after the Big Bang, and has been slowly destroyed over the eons as it is burnt in stars and converted to heavier elements. But it seems that these theories of deuterium's demise may be incorrect.

Writing in the Astrophysical Journal, the FUSE team's new large deuterium survey not only poses new questions about how stars and galaxies are made, but also solves a 35-year-old mystery concerning deuterium's uneven distribution in the Milky Way galaxy. "For more than three decades, we have struggled to understand and explain the widely varying levels of deuterium," said FUSE principal investigator, Warren Moos, from Johns Hopkins University. "Though the answer we have found may be unsettling to some, it represents a major step forward in our understanding of chemical evolution."

The deuterium saga starts back in the 1970s, when astronomers noticed that it was not as evenly spread throughout space as other elements. "FUSE was built to attack the deuterium problem," according to William P. Blair, FUSE's chief of observatory operations. "It is very gratifying to see this long-anticipated result, and it will surely be a legacy of the FUSE mission."

Blair explained that FUSE's sensitivity: "has allowed many more deuterium measurements, and for stars at greater distances from the sun." It is these numerous, distant observations that were crucial in confirming that there does appear to be more deuterium in some other parts of the Milky Way than there is close to our sun. And the pattern of deuterium variations FUSE found strongly supports Princeton University's Bruce Draine's theory that predicts how heavy hydrogen might behave in interstellar space.

Draine developed computer models that showed how deuterium might bind more readily than light hydrogen to interstellar dust grains, changing from an easily detectable gaseous form to an unobservable solid. These models suggested that in places like the neighborhood of the sun, relatively undisturbed for eons, a significant amount of deuterium may have disappeared from view in this way. In other areas, disturbed by supernova blasts or nearby hot stars, dust grains would have vaporized, releasing deuterium atoms back into a detectable gaseous form.

In fact, FUSE found deuterium levels of about 15 parts-per-million measured in our neighborhood and even lower - as low as 5 parts-per-million - elsewhere. But FUSE also found concentrations as high as 23 parts-per-million in regions where supernovae or hot stars have occurred. The low levels found near here, the FUSE researchers conclude, indicate only that much of the deuterium in this neighborhood is in undetectable solid form. "The peak galactic detection levels are likely close to the real total deuterium abundance in the Milky Way, with the rest of it in hiding, not destroyed," said NASA's George Sonneborn, mission project scientist.

If that is the case, scientists have been wrong to believe up to now that at least a third of what was thought to be the original 27 parts-per-million of local deuterium has been destroyed since the Big Bang. In fact, the current level is only about 15 percent below that original level. So, the FUSE findings imply either that significantly less deuterium is being converted to helium and other heavier elements in stars, or, that much more deuterium has rained down onto our galaxy over its lifetime than had been previously been thought. In either case, our models of the evolution of the Milky Way galaxy will have to be revised significantly.

Check out the FUSE web page.