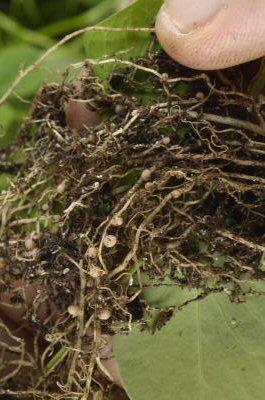 Scientists at the John Innes Centre, Norwich and Washington State University, have managed to trigger nodulation in legumes, a key element of the nitrogen fixing process, without the bacteria normally necessary for this to occur. Detailing their work in Nature, the researchers say their investigations could lead to the ability to trigger nitrogen fixation in non-legume crops, which would dramatically reduce the world's need for inorganic fertilizers.

The plants used in this study - legumes - are an important group as they have the ability to fix nitrogen themselves, thanks to a symbiotic relationship with nitrogen-fixing bacteria in their root nodules. Farmers often use legumes as a rotation crop to naturally enhance the nitrogen content of soils without fertilizers. Scientists have been working for a number of years to understand the symbiosis between legumes and rhizobial bacteria, hoping that one day they can transfer this trait to crop plants, the majority of which cannot fix nitrogen themselves. (Pictured: Nodules occur on the roots of legumes, in this case the pea. The nitrogen fixing bacteria live inside the cells of the nodule.)

In this new study, the researchers have used a key gene that legumes require to establish the interaction with the nitrogen-fixing bacteria to trigger the growth of root nodules, even in the absence of the bacteria. "We now have a good understanding of the processes required to activate nodule development. The nodule is an essential component of this nitrogen fixing interaction as it provides the conditions required for the bacteria. Nodules are normally only formed when the plant perceives the presence of the bacteria. The fact that we can induce the formation of nodules in the plant in the absence of the bacteria is an important first step in transferring this process to non-legumes. If this could be achieved we could dramatically reduce the need for inorganic nitrogen fertilizers, in turn reducing environmental pollution and energy use. However, we still have a lot of work before we can generate nodulation in non-legumes," explained lead researcher Dr Giles Oldroyd.