You are here: Home › News › Early Humans And Chimps Much More Than Just Good Friends
By Will Parker on May 18, 2006 in News 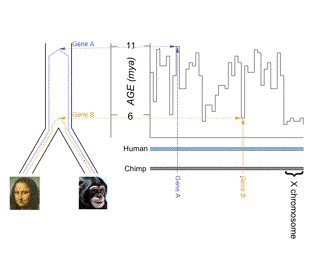 Scientists at MIT and Harvard say the evolutionary split between humans and chimpanzees is much more recent – and more complicated – than previously thought. Their study, appearing in Nature, indicates that the two species could have split as recently as 5.4 million years ago. They also suggest that the speciation process was unusual, possibly involving an initial split followed by later hybridization, before a final separation.

The study’s senior author, David Reich, said the results about how we separated from chimpanzees were completely unexpected.

“We found that the population structure that existed around the time of human-chimpanzee speciation was unlike any modern ape population. Something very unusual happened at the time of speciation”, he explained. Reich referred specifically to:

“The genome analysis revealed big surprises, with major implications for human evolution,” said Eric Lander, co-author of the paper. “First, human-chimp speciation occurred more recently than previous estimates. Second, the speciation itself occurred in an unusual manner that left a striking impact across chromosome X. The young age of chromosome X is an evolutionary ‘smoking gun’.”

Hybridization – that is, initial separation of the two species, followed by interbreeding and then final separation – could explain the strange phenomenon seen on chromosome X. Interbreeding is known to place strong selective pressures on sex chromosomes, which could translate to a very young age for chromosome X. “A hybridization event between human and chimpanzee ancestors could help explain both the wide range of divergence times seen across our genomes, as well as the relatively similar X chromosomes,” said Reich. “That such evolutionary events have not been seen more often in animal species may simply be due to the fact that we have not been looking for them.”