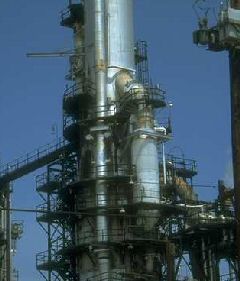 The Aamjiwnaang First Nation community near Sarnia in Ontario, Canada has seen an enormous decline in male births over the last decade. The community lives on reserve land in the St. Clair River Area of Concern, immediately adjacent to several large petrochemical, polymer, and chemical industrial plants. The research into the community's gender ratios was led by Constanze A. Mackenzie of the University of Ottawa, and the resulting study will appear in the journal Environmental Health Perspectives. The research began when the community expressed concerns about an apparent decrease in male births. The researchers analyzed live birth records from 1984 to 2003 and discovered that until 1993, the community's sex ratio was within expected parameters. But starting in 1994, the percentage of male births began to decline sharply, and the significant drop-off continued through 2003.

The sex ratio - the proportions of male and female births within a population - is a key indicator of the reproductive health of a population and of great interest to researchers. Globally, between 50.4 percent and 51.9 percent of births are males, and this percentage is usually stable. Canadian figures fall within these parameters, with 51.2 percent of births male. But in the Aamjiwnaang community, from 1999 to 2003, males represented only 34.8 percent of births.

The researchers say the proportions are clearly outside of what could be considered a normal range. "Although normal variation in sex ratio can be expected in any population, especially with a small sample size, the extent of the sex ratio deviation appears to be outside the range of normal," they wrote.

In addition to skewed human statistics, studies of the St. Clair River Area of Concern have found changes in the sex ratios and reproductive ability of fish, bird, and turtle populations. It is thought that this may be due to exposure to endocrine-disrupting chemicals (EDCs) from neighboring industrial plants. The present study did not seek to determine the presence of chemicals such as EDCs and the extent to which those factors may have contributed to the suddenly shifting sex ratios but a 1996 soil assessment of the land found "high concentrations of several contaminants."

The authors believe further studies are warranted. "Although there are several potential factors that could be contributing to the observed decrease in sex ratio of the Aamjiwnaang First Nation, the close proximity of this group to a large aggregation of industries and potential exposures to compounds that may influence sex ratios warrants further assessment into the types of chemical exposures for this population," the researchers concluded.