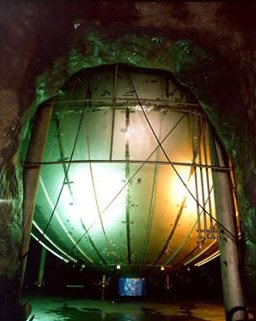 Located in a mine cavern beneath the mountains of Japan's main island of Honshu, the Kamioka Liquid scintillator Anti-Neutrino Detector (KamLAND) is set to present us with a new view inside our planet. Researchers have shown that anti-electron neutrinos emanating from the earth, so-called geoneutrinos, can be used to open a unique window, revealing information that is hidden from other probes. Neutrinos and their anti-matter counterpart, anti-neutrinos, are subatomic particles that rarely interact with other matter, passing straight through large bodies such as planets.

Spokesperson for the research team, Stuart Freedman, said that geoneutrinos can be detected and measured at KamLAND via a distinctive reaction signature after the subtraction of anti-neutrinos captured from nearby reactors and in background events from alpha particles. "KamLAND is the first detector sensitive enough to measure geoneutrinos produced in the earth from the decay of uranium- 238 and thorium- 232.

Since the geoneutrinos produced from the decay chains of these isotopes have exceedingly small interaction cross sections, they propagate undisturbed in the earth's interior, and their measurement near the earth's surface can be used to gain information on their sources," explained Freedman.

The KamLAND detectors appear to be able to accurately measure the radioactivity of uranium and thorium isotopes, the two main sources of terrestrial radiation. The measurements the collaborators made are in close agreement with the predictions of the leading geophysical models of our planet's thermal activities. "This is a significant scientific result, we have established that KamLAND can serve as a unique and valuable tool for the study of geoneutrinos with wide-ranging implications for physical and geochemical models of the earth," Freedman said. "Our results show that measuring the flux of Earth's geoneutrinos could provide scientists with an assay of our planet's total amount of radioactivity. Measuring geoneutrinos could also serve as a deep probe for studying portions of the planet that are otherwise inaccessible to us."

The results from KamLAND appear in Nature and are the work of a collaboration of 87 authors from 14 institutions. In measuring geoneutrinos generated in the decay of natural radioactive elements in the earth's interior, the researchers believe it should be possible to get a three-dimensional picture of the earth's composition and structure. This could provide answers to such as questions as how much terrestrial heat comes from radioactive decays, and how much is a "primordial" remnant from the birth of our planet. It might also help identify the source of Earth's magnetic field, and what drives the geodynamo. "There are still lots of theories about what's really inside the earth and so it's still very much an open issue. The neutrinos are a second tool, going from using only seismic waves to the point where we're doing essentially simple-minded chemical analysis," concluded co-researcher Giorgio Gratta, from Stanford.