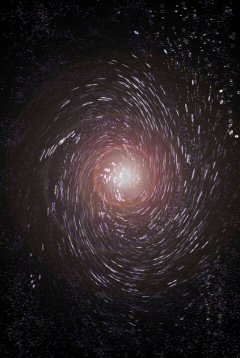 Merrit's new supercomputer, known as the GravitySimulator, is designed to solve the "gravitational n-body problem" (how n bodies motions and interactions are resolved based on their initial positioning, mass and velocity). GravitySimulator simulates how a galaxy evolves as the stars move about each other in response to their own gravity. This computationally demanding task would normally require a tremendous amount of computer time, with standard supercomputers only able to achieve calculations of thousands-of-stars at a time.

GravitySimulator, one of only two machines of its kind in the world, achieves a top speed of 4 Teraflops, or four trillion calculations per second, making it one of the 100 fastest computers in the world, handling up to 4 million stars at once. The new computer achieves its increased performance by incorporating special accelerator boards, called GRAPEs or Gravity Pipelines, into a standard Beowulf-like cluster (a "Beowulf" system allows a programmer to spread processing tasks among a group of networked computers).

Currently, Merritt and his team's pet project involves studying the binary black hole problem - what happens when two galaxies collide and their central, super-massive black holes form a bound pair. "Eventually the two black holes are expected to merge into a single, larger black hole," says Merritt. "But before that happens, they interact with the stars around them, ejecting some and swallowing others. We think we see the imprints of this process in nearby galaxies, but so far no one has carried out simulations with high enough precision to test the theory." Closer to home, Merritt and his team would like to use GravitySimulator to study the dynamics of the central Milky Way Galaxy in order to understand the origin of our own galaxy's black hole.