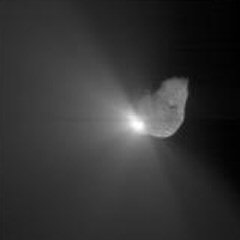 Mission accomplished! Deep Impact's intercept with comet Tempel 1 has proceeded without a hitch, with NASA's ground control personnel seen cheering, back slapping, high-fiving, and hollering: "That's awesome!" and "My God!" soon after the impactor's direct hit with the comet was confirmed. "The impact was perfect", said Dr. Mike A'Hearn, the mission's team leader.

After its 172-day journey to comet Tempel 1, NASA's Deep Impact spacecraft successfully released its impactor at 11:07 p.m. (PDT) Saturday, 547,000 miles away from its quarry. The washing-machine-sized, copper-fortified impactor used battery rather than solar power for its one-way voyage to oblivion. A spokesman from the Jet Propulsion Laboratory (JPL) said that the navigation component of the mission had gone far better than they could ever have imagined, with none of their contingency plans needing to be employed.

As Tempel 1 and the impactor raced towards each other at about 6 miles per second, there was little time for mission controllers to admire their work. Twelve minutes after the impactor was released the flyby spacecraft began a 14-minute long divert burn that slowed its velocity relative to the impactor by 227 miles per hour, moving it out of the path of the onrushing comet nucleus and putting itself into a ringside seat for the fourth of July celestial fireworks. 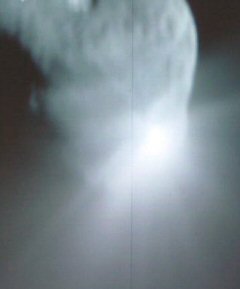 The doomed impactor successfully beamed back a number of high-res images of the comet up until its final moments before vaporization, at around 10:55 pm (PDT) Sunday. All impactor data including the remarkable images were transmitted to the flyby craft - which then forwarded them to Deep Space Network antennas that listened 83 million miles away. One NASA spokesman said that while the raw images that they have now are of high quality, further rendering and cleaning-up will provide greater clarity. While many images have been captured, it will take some time for the bulk of the higher-res images to arrive over the relatively slow 200 kilobit per second communications link.

First images from the impact show a large, bright jet of material spewing from the comet. Details of the crater that was formed by the impact were not available immediately although NASA staff said they expected it to be around the size of a sports stadium. Researchers hope analysis of the material thrown out by the impact will provide them with information about the composition of the comet, and, the solar system. A'Hearn said that from an initial, crude analysis of the comet's composition, they detected "unidentified spectral features."

Compared to prior outbursts displayed by the comet Tempel 1, the one caused by the impactor was "a lot bigger", said A' Hearn, adding that in relation to the nucleus, the size of the plume "rules out porous structures". A'Hearn also said that any further implications of this observation will depend on analysis from NASA's cratering experts.

The results should keep researchers happy for years to come, "There is a lot of science to be had here," said NASA's Charles Elachi.