You are here: Home › News › Global Warming Causes Genetic Changes
By Will Parker on February 13, 2003 in News 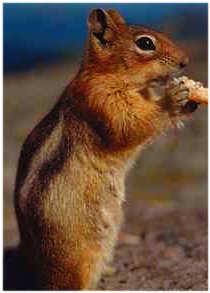 For the first time ever, a University of Alberta researcher has discovered that an animal species has changed its genetic make-up to cope with global warming. In the past, organisms have shown the flexibility – or plasticity – to adapt to their surroundings, but this is the first time it has been proven a species has responded genetically to cope with environmental forces.

Dr. Stan Boutin, from the Department of Biological Sciences at the University of Alberta in Edmonton, has been studying a North American red squirrel population in Canada’s southwest Yukon for almost 15 years. The squirrels, faced with increasing spring temperatures and food supply, have advanced the timing of breeding by 18 days over the last 10 years-six days for each generation. His findings appear on First Cite and will appear in the journal Proceedings of the Royal Society London B next month.

Boutin and his colleagues used an approach called quantitative genetics, long used in agriculture but never before applied to a wild species. Through analytical modelling, the team of researchers was able to sort out how much of the squirrels’ adaptation is due to a plastic, individual response and how much is due to genetics. “This has never been done before,” said Boutin. “Other researchers have stopped at plasticity.”

Phenotypic plasticity is measured by how an individual squirrel can change the timing of a reproductive cycle from one year to the next compared to one generation to the next, which is what Boutin is studying. “Only by having long-term lineages can we get at this research,” he said.

Although this discovery shows the red squirrel is adapting well to its warmer environment, the future is still a concern to scientists especially considering the rapid rate of climate change. Predicting the squirrel’s threshold is also impossible, said Boutin, so it is difficult to know if the animal has reached is peak of “adaptation skills.” The next step is to look at different components of the genome to see if researchers can pinpoint more closely the set of genes responsible for these changes.