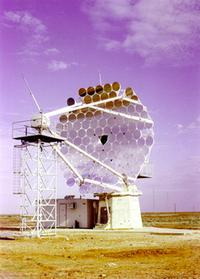 For fifty years, gantries, tracking dishes and other bits of apparatus from the space age have towered above the flat Woomera horizon. Now, in a project worth millions of dollars, Adelaide and Tokyo Universities have built a new 10 metre gamma ray telescope that adds its own distinctive outline.

The Woomera rocket range came into existence in 1947. From then on, Australia's involvement in international space science proceeded in waves.

The first missile was launched at Woomera in 1949, to be followed by Skylark rockets then others in the Black Knight and Europa series. In 1967 a Redstone rocket carried Australia's first satellite, constructed by Adelaide University's Physics Department and the Defence Science and Technology Organisation.

Woomera also was the site of the first deep-space station to be established outside the United States by NASA. It took part in many projects, including the Venus flyby and the Ranger and Lunar Orbiter missions, which provided important information for the Apollo missions to the moon. Later, the Narrungar ground station was to play a significant role in the Gulf War.

Narrungar is now closed, and the tracking station ceased operations in 1972, with the antenna broken up for scrap. Many regretted it, seeing the decline of Woomera operations as signalling Australia's withdrawal from a significant role in space science, but the game is not over yet. Recently, two companies have announced plans to re-use Woomera for space launches, and a significant chapter in international astrophysics research is just beginning, with the opening this week of the Cangaroo telescopes.

From their site near the rocket range, the telescopes will detect wavelengths that lie outside the visible spectrum, emitted from supernovas, pulsars and black holes. These last get their name from their enormous gravitational forces; so strong that no light can escape from their interiors, but the electric and magnetic fields that surround black holes are a different matter. They emit various forms of radiation. Giant jets of material ejected by the fields give off gamma rays, and it is these emissions that the scientists will study with the new telescope.

"We will look for huge black holes at the centres of galaxies,' Says Dr John Patterson, Associate Professor at Adelaide University's Physics Department, and Australian Co-ordinator of the project. "They have an enormous effect on the energy of a galaxy, and how it evolves. " he said.

"We want to study what happens to their energy," said Dr Patterson. "From its centre, a black hole can shoot out a jet called a blazar like the axle from a wheel, and at huge velocities. Although we now have some theories about how they work, nobody really knows. At present, theorists from Adelaide University and the Australian National University are working on this problem," he said.

"We think that there are black holes that may contribute up to 10% of a galaxy's mass," said Dr Patterson. " These can be more than100 million times larger than the mass our sun," he said, "and we have also made significant contributions to the study of pulsars and supernova remnants in our own galaxy which emit gamma radiation."

Those studies were made with Cangaroo I, a 3.8 metre gamma ray telescope that has now been replaced by the 10 metre Cangaroo II. The project's name encodes the identity of its main players. The Collaboration of Australia and Nippon for a Gamma Ray Observatory in the Outback has provided both the name ŒCangaroo' and $4 million to build Cangaroo II, including $200 000 from the Australian Research Council and the National Committee for Astronomy.

It is expected that a further $13 million supplied by the University of Tokyo will fund three further telescopes like Cangaroo II. The first will be completed in 2002, after which a review will decide the future development of the project.

Linking the instruments means greater sensitivity. Spaced about 100 metres apart, the four telescopes will be combined to form Cangaroo III. It will enable researchers to study the last gap in the spectrum of electromagnetic radiation from the cosmos.

Woomera's clear air and lack of cloud cover make it an excellent site for such an observatory. A group of thirty scientists from Japan and Australia will use the Cangaroo telescopes there for their own research and to train the next generation of astrophysicists.

This week, University staff and Japanese visitors are in Woomera for a ceremony on May 9 to open Cangaroo II and launch Cangaroo III. The ceremony, performed by His Excellency, Mr Masaji Takahashi, Ambassador for Japan, is an official event in National Science Week.

On 24 May, at an official reception to be held at the Australian Embassy in Tokyo, a video of the launch will be shown to about 60 guests invited to celebrate the commissioning of the telescope.

Cangaroo III will be the first such telescope system in the southern hemisphere, and it is expected to provide important new findings. Ground-based telescopes in the northern hemisphere have already located and studied a few black holes, but NASA's orbiting gamma ray observatory has detected more than 250 blazars, suggesting that many more black holes await observation.

"This southern telescope will be able to provide new data on southern-sky black holes, that have never been studied," said Dr Patterson. "We hope it will be an important addition to the satellite work," he said.