Another Kids and Aminals Story 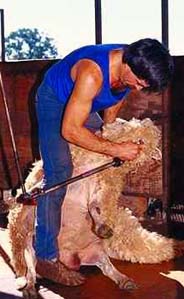 Regular contact during childhood with farm animals could provide lasting protection against allergic illnesses, according to the authors of a broad-ranging study conducted in Austria on 2283 children aged between 8 and 10. The study, a joint effort, by the Paediatric Pulmonology Department of the children's hospital and the Public Health Department of the city of Salzburgwas recently presented at a meeting of the European Respiratory Society (ERS) in Madrid.,

The parents of the children were asked in a detailed questionnaire to provide information about the children's daily lives and about any allergies they were suffering from. At the same time, 1137 of the children were subjected to skin prick tests, designed to show up any immediate hyper-sensitivity to 7 different substances that could cause local allergies.

When the data were analysed, it showed clearly that children living on farms were 3 times less sensitive to hay fever than those living in a non-rural environment (3.1% compared with 10.3%).

In the case of asthma, the ratio was even more pronounced: 1.1% compared with 3.9%. Reactions to skin prick tests were about twice less frequent (18.8% against 32.7%) for farm children as for the others.

The clearly difference in the results remained even when other factors were taken into account, such as genetic background, parents' education, eating habits and living conditions.

In order to make quite sure and to refine the results, ther study's author Josef Riedler tested how the figures would look in the case of regular contact with cattle or poultry, regardless of the kind of environment the child lived in. The gap between town and country in fact closed substantially, highlighting rather the decisive influence of regular contact with farm animals.

The cause as to why some children develop protection has not been established, although-as the Dr Riedler explained, "a possible explanation might be the development of immune tolerance or the stimulation of Th1 cells and suppression of Th2 cells, by increased exposure to microbial antigens in the stables or farm houses."

However Prof. Kai-H�kon Carlsen, Head of the ERS Pediatric Assembly and Director General of the Voksentoppen National Hospital in Oslo says that doctors and researchers must beware of rushing to conclusions. Previous studies have shown that early allergen contact (during the first year of life) may predispose to allergy later in life. This has been reported for pollen and for animal dander. In the light of the present report, it is therefore important to establish whether there are bacterial products or antigens from stables that may be effective in protecting against later sensitisation for children raised on farms. It should not be forgotten that for children who have developed an allergy towards domestic animals like cats or dogs, it is very important to keep them away from those animals in order to counteract a more severe development of the disease."